Want to Learn More About our Local Fungi, but Can't Make our Forays??

Are you interested in a personalized mushroom hike at the location of your choice?  Please contact club member, Anne Small via the club contact form.  Hike fees begin at $50 per hour (for a group of 6 or less).  Locations are limited to the Minocqua/St Germain/Eagle River area.  This is a great way to learn about fungi in a small group setting.  The best time of year is late July through early October depending on weather conditions.

Growing Your Own Mushrooms - UPDATE BELOW** 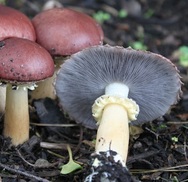 It is possible to grow your own crop of mushrooms with careful preparation and  specially prepared mushroom spawn.  Dave Mollen is trying his hand at growing Wine-capped Stropharia (S. rugosoannulata.) After clearing a shaded area, he soaked straw for a three day period, then mixed in a prepared “sawdust” spawn and spread the material on the soil. The 8 inch layer of straw/spawn mix  was then covered with fresh cedar chips. Now the waiting game! There should be gradual growth of mycelium and then, in late fall or in spring,  the  fruiting of the large, edible,  red-brown capped mushrooms should occur.  You can see photos of Dave's site preparation below.

UPDATE:  All the work for preparing the spawn and growing area has paid off!!  Dave spotted his first growth of Stropharia on Sept 15th, only two and a half months after "planting."  See his photo below.

Spawn is available at www.fieldforest.net 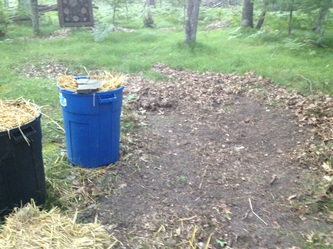 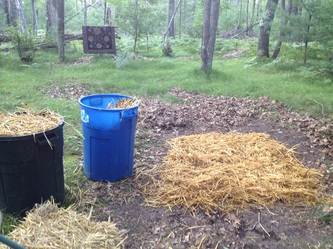 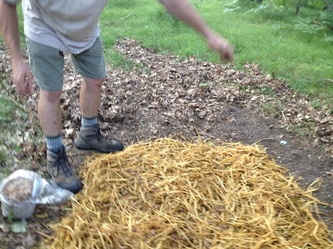 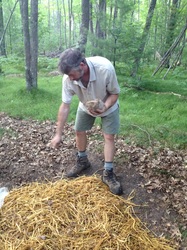 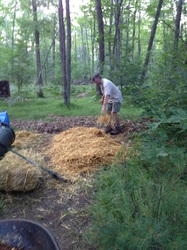 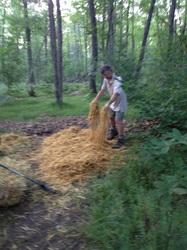 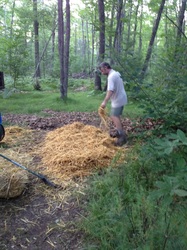 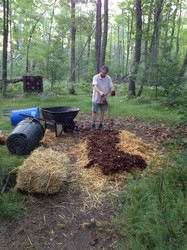 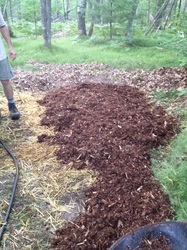 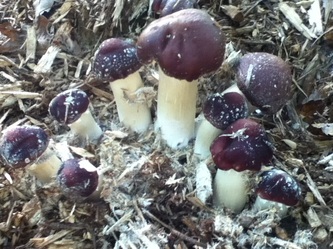 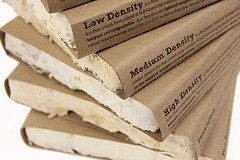 Eco-friendly insulation by Ecovative Design
Observations of the action of mushroom mycelium on woodchips, led to an innovative new use for fungi.  Two founders of a company called Ecovative Design have developed a method that harnesses the bonding powers of fungal mycelium to produce eco-friendly packaging and insulation products. They grow fungi in various types of agricultural waste and other lignum- rich materials. Mycelial action results in a mixture which is then molded and dried to form packaging and a Styrofoam-like insulation product. These products, unlike polyurethane and polystyrene, are biodegradable and so, environmentally friendly.
For their unique work, Ecovative Design won the 2012 Environmental Quality Award from the Environmental Protection Agency Region 2.  A number of other prestigious awards have recognized the company’s work.
Recently Sealed Air Corporation of NY announced a joint venture with Ecovative that will accelerate productions, sales and distribution of their packaging  under the trademark EcoCradle® Mushroom Packaging.  Click here to check out their website. 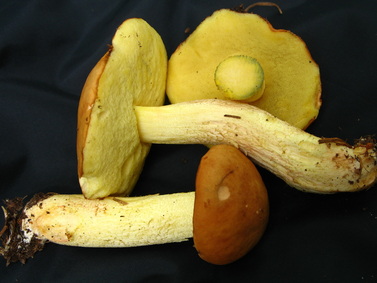 Boletus subglabripes (aka Leccinum subglabripes) is a commonly occurring bolete. It has a broadly rounded, rust brown cap, bright yellow pore surface and yellow stem. The stem sometimes has scattered reddish tones on its surface.  In the Wisconsin Northwoods, mushrooms of this description  fruit in large groups in areas of mixed woods and especially under oak. .

The identification of this bolete is in some question for members of the NMC.  We were introduced to a bolete with similar field characteristics, years back, by local photographer and experienced mushroomer, Jana Jirak.  Jana presented samples of the bolete to Nancy Smith Weber during a class at Nicolet College, Rhinelander, WI.  Weber’s study of the bolete was published in Michigan Bolanist, vol 18.  Weber identified the specimens  as Boletus sphaerocystis. According to Weber, some cell structures in its cap differed from those in B subglabripes.

At present, the question is still out as to which of the look-a-likes (both good edibles) is filling our baskets.  We intend, this 2011season, to use specimens from our collections for microscopic study and hope to solve the identity matter.   Club members refer to the bolete, described above and pictured here, as Jana’s Bolete. We have adopted it as our club emblem.

For detailed descriptions and comment on this bolete try these on-lne sites: www.mushroomexpert.com and rogersmushrooms.com 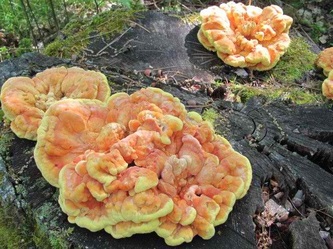 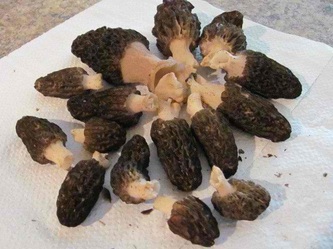 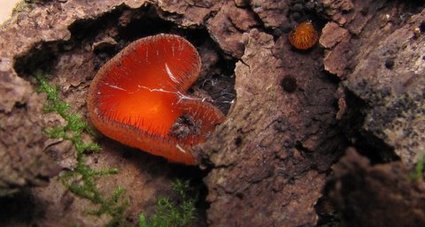